A grounded premature rook or crow with white, brittle or partly broken wing and tail feathers needs expert and longterm care to allow the damaged feathers to be replaced during their annual moult. Birds affected should not be released before their complete annual moult, which happens for fledglings born this year in the summer of the following year. Otherwise it will be unlikely that these birds are going to survive their first winter, as the deficient plumage will quickly deteriorate further. This usually means that these birds will eventually become grounded. They will get easily wet and hypothermic, are prone to predation and will soon be unable to sustain themselves.

END_OF_DOCUMENT_TOKEN_TO_BE_REPLACED

This fascinating blog post by Kaeli Swift gives some detailed insight into the topic of what controls feather pigmentation in birds, and in particular corvids.

Shared with the kind permission of Kaeli Swift of Corvid Research. 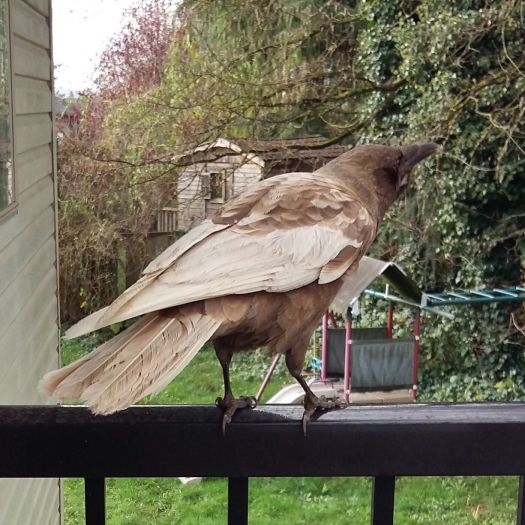 Generally, when I receive emails with the subject line “interesting crow” it’s because the author noted some peculiar or amusing crow behavior they want to share, or because they spotted an unusual looking crow due to AKD, leucism or avian pox. Rarely, it’s for none of these reasons and is truly a horse of a different color. Or in this case, crow.[…]

via The science behind caramel crows — Corvid Research

Narziss and Goldmund are two premature house martin fledglings, who have been found on the ground being unable to fly. Their nest allegedly came down for unknown reasons. According to the finder, Narziss has been spotted in the morning being on the ground and unable to fly, but has been left there for reasons unknown. Only as Goldmund has been spotted in the afternoon, also being found on the ground, both birds have been collected by the finder and brought to us. The admission assessment did not reveal any external injuries. However, both house martins demonstrated very obvious signs of dehydration, starvation and exhaustion.

END_OF_DOCUMENT_TOKEN_TO_BE_REPLACED

Jack is a two year old imprinted jackdaw, who came to us in March 2017, having shown deficiency signs at the time of admission caused by an insufficient diet. Jack has been raised by his own and kept in a cage with occasional indoor free flight after being found as an orphan. It was only last year, when he has been joined by a fledgling carrion crow. Jack has also suffered of a condition called cross, crooked or scissor beak, in which the top and bottom beaks do not align properly. This can be caused by genetics, an injury or the inability to maintain the beak’s length and shape by normal honing on rocks or other hard surfaces. It is also thought that an improper hand feeding technique and an unbalanced diet play a role in the development of this beak deformity.

A scissor beak needs frequent trimming, which has been done in Jack’s case carefully and gradually in several short sessions to allow the beak to regrow and reshape into a ‘normal beak’. However, this is not always possible and the success as well as relapse rate depends on many factors. In Jack’s case this has been achieved and the beak is now ‘maintenance free’ for more than three months. Apart from a balanced diet, it is also important to provide any bird with the means to ‘use’ the beak sufficiently, to enable the bird to strengthen the facial muscles and to allow natural wear and tear. Rotten tree stems, pebbles, bricks, rocks, shells, wooden toys, cuttle fish bone and marrow bone dog biscuits are only a few of suitable toys and tools, which help to keep a beak in a good shape and a jackdaw well entertained. Achieving the ‘perfect’ shape of the beak through trimming is obviously important and the prerequisite to solve the scissor beak problem. However, if a scissor beak persist for long, muscles will get atrophic, meaning they become shorter than normal, which can pull even a well shaped beak out of alignment resulting in the beak to continue to grow in an asymmetric fashion. This is why all beak trimming sessions do also involve some degree of physiotherapy to counteract problems caused by muscle atrophy.